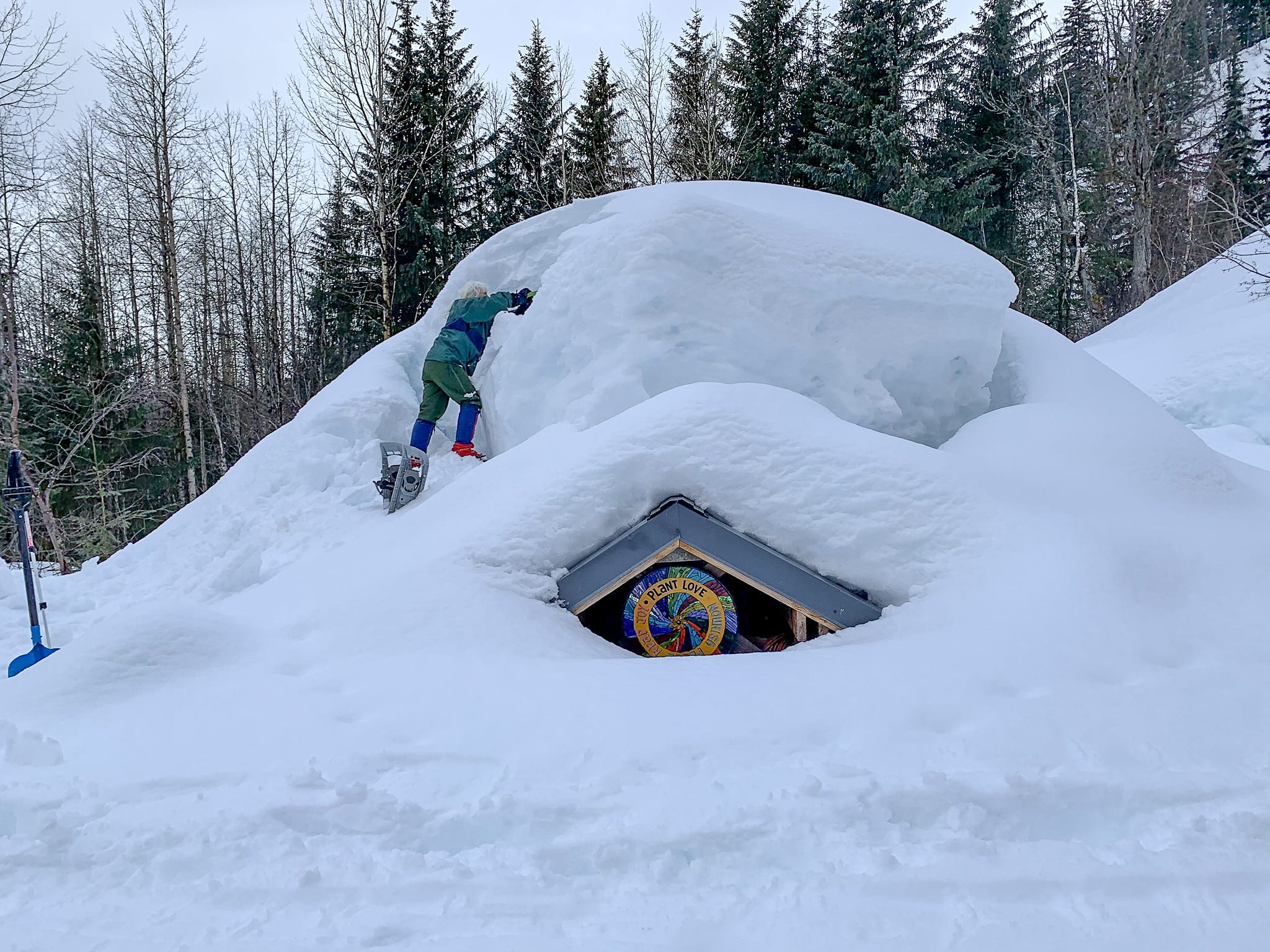 Mardell Gunn and her partner, Mark Kistler, aka Diz, had been gardening in Haines, Alaska, using standard hoop houses for several years. In 2016, they searched for a polycarbonate structure that could withstand heavy snow loads and humid summers while providing a protected environment to grow fresh heat-loving vegetables that can’t be grown successfully outside. Specifically, tomatoes. That’s when the internet led them to a 26′ Growing Dome.

“If I recall, at the time, Growing Domes were the only polycarbonate dome greenhouse that we felt comfortable leaving up year-round. This year was a great test for it. We had wet, heavy snow almost 6ft on top of the greenhouse at a time. I have to compliment the design. The structure is so strong. We never worried about failure, and wind didn’t affect it at all.” – Mark

Going into the building process Mardell and Mark knew they wanted to make a few modifications to the standard Growing Dome on their own that might better suit their humid, snowy environment. The added measures included a pole in the center of their greenhouse that adds a bit of extra support and an extended covered entry area that relieves pressure from the doorway, allowing it to open easily. It is also quite beautiful.

To reduce humidity, Mardell and Mark also opted to leave out the above-ground pond. Instead, making up for the loss of the Growing Dome’s main heat sink with concrete raised beds. Mardell said they “used several layers of earthbags filled with sand found on their property followed by chicken wire, then concrete, and a coat of black paint to attract the heat.

“We also added extra ventilation and installed the undersoil fans included with the kit. I really think it’s helping to prevent mold.” – Mardell

Growing Vegetables from May to October

Mark and Mardell don’t garden in their Dome all four seasons due to minimal hours of sunshine in the winter months. “We do not get enough light to grow without adding lights which is cost-prohibitive because of high electricity costs.” So, they take full advantage of the growing season they do have.

From the third week of May to the end of October, Mardell grows anywhere from 150 – 200lbs of tomatoes. That is unheard of in Alaska. They have over 31 tomato plants, tromboncino squash, more than 33 peppers, and a ton of cucumbers. The squash is reaching 12 ft. high, taking full advantage of the vertical greenhouse space.

“It is not a big deal down south, but here in Alaska, it is not easy to get an overabundance of tomatoes or peppers! My 26′ Dome allowed me to have that this year!!!  It is a gift for me to have tomatoes that taste good.” – Mardell Gunn

Investing in a Healthy Future

Mark and Mardell described themselves as “vegans who eat fish because fish is so plentiful here.” They currently have 3,000 sq. ft. of growing space stretched across mountainside land where they produce a lot of their own food and hope to for many years to come.

“I call the Growing Dome our long term disability. I hope to garden until I am 95, and I imagine as I grow older, my outdoor growing space will dwindle, and instead, I can see myself solely gardening in our Growing Dome.” – Mardell

It was a significant investment to have the greenhouse shipped up to Alaska from Colorado, but Mardell and Mark know that their Growing Dome Greenhouse will withstand another 25+ years.