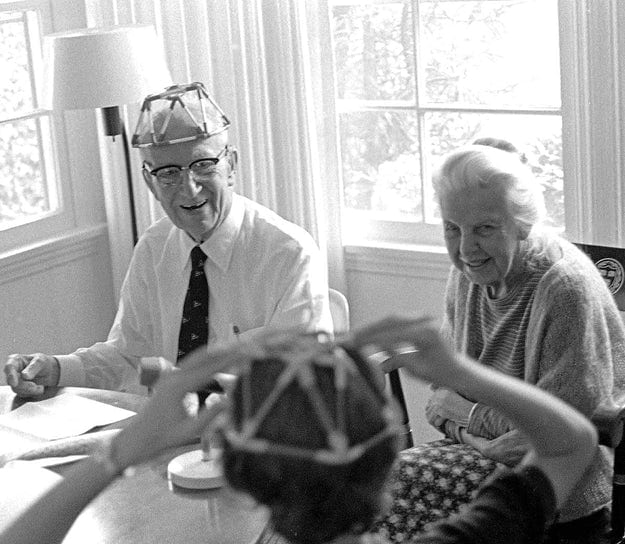 Richard Buckminster Fuller was born on July 12, 1895.  He was very cross-eyed…almost blind. This gave him a unique vision of the world.

In kindergarten, Bucky was given some toothpicks and dried peas and told to make a structure.

He had never seen a house or a barn, so while the other kids were making ‘normal’ rectangular structures, little Bucky was trying to make something that would work. Through experimentation, he found that a triangle was the strongest structure. The tetrahedron he built would hold its shape…where the cuboid shapes would give under a small force.

Fast forward to 1948, Bucky was working with one of his students at Black Mountain College, a future sculptor named Kenneth Snelson. They were further exploring the use of tension and compression in the same structure, coining the term tensegrity. They developed a new truss that dispersed loads equally along three sets of parallel planes. Pressure at any one point would be immediately distributed through the entire structure, giving it enormous strength. They called it the octet truss, which was composed of alternating tetrahedrons and octahedrons.

They got the chance to prove out their design concept when engineers working on the remodeling of the Ford Rotunda in Dearborn, Michigan wanted to enclose the open center court. Engineers calculated the weight of a traditional steel frame at 150 tons, which the structure could not support. Bucky’s design weighed only 18,000 pounds, which not only solved the design problem but also became a huge tourist attraction when it was completed in 1953. Unfortunately, the structure burned down in 1962.

The US Marine Corp. commissioned Bucky to design a lightweight shelter that could be transported via helicopter. The portable geodesic domes became “the first major improvement in mobile military structures in 2,600 years”. The above image made the cover of the New York Times in 1964, and reminds me of a video one of our customers sent us recently of them moving their Growing Dome Greenhouse with a crane!

The first known greenhouse application of the geodesic dome was the Climatron®, built for the Missouri Botanical Gardens in St. Louis. It opened to the public on October 1, 1960. The design of the Climatron greenhouse was developed by St. Louis architects Murphy and Mackey, based on Buckminster Fuller’s principles. It won the 1961 Reynolds Award, an award for architectural excellence in a structure using aluminum. In 1976 it was named one of the 100 most significant architectural achievements in United States history. The term “Climatron” was coined to emphasize the climate-control technology of the greenhouse dome. The Climatron has no interior support and no columns from floor to ceiling, allowing more light and space per square foot for plants than conventional designs. It rises 70 feet in the center, spans 175 feet in diameter at the base, has 1.3 million cubic feet, and encloses approximately 24,000 square feet (more than half an acre). It is a tropical greenhouse paradise in the middle of the Great Plains!

In 1976 John Denver and Tom Crum founded the Windstar Foundation In Aspen, CO. They wanted to bring in the world’s most innovative thinkers to research and promote sustainable living practices and ways to solve the world’s problems.

R. Buckminster Fuller was one of the speakers at their seminars, and led a workshop exploring geodesics and other topics. He said “Find what it is that is needed and wanted…and go do it.”

Denver and Crum took his advice.

After the workshop, they had the idea to build a geodesic biodome on the Windstar Ranch as an example of more sustainable living and gardening. The goal of the biodome project was to produce food locally year-round in a cold climate with only solar energy. Puja Parsons remembers that Bucky came to be like a father to the whole project. But in the summer of 1983, weeks before construction was scheduled to start, Bucky died of a heart attack. The team, along with the rest of the world, was heartbroken.

But they wanted the project to continue and they enlisted a group of young architects and engineers to complete the Windstar biodome. It was the last geodesic dome Buckminster Fuller designed. It was a unique design with alternating concentric and eccentric struts, to allow for two layers of poly film with an air pocket for additional insulation. Bucky called that geometry a Deresonated Tensgrity dome. It was a tropical greenhouse paradise in the middle of the Rocky Mountains.

Udgar Parsons became involved with the biodome project shortly after Bucky’s death in 1983. They built a 50′ diameter biodome at Windstar that was a more traditional geodesic design, seen in the video below under the backdrop of Mt. Sopris in Aspen. Many others were built in Colorado and across the country.

“The first Domes I built were modeled on the Domes that Bucky designed for the Windstar Foundation. Even though his Domes were essentially made of triangles; for these two domes, he decided to remove some of the members inside the pentagons and hexagons to create what he called a deresonated tensegrity structure. The first geodesic domes I built did indeed have the struts removed from the pentagon and hexagons but I decided that it created too much flexibility in the shape, especially for the wind and snow loads in the Rocky Mountains. So after that I built Domes that were completely made of triangles.”

“When first designing the Growing Dome I was influenced by Bucky in different ways. My bible in those days was Domebook 2 published in 1971 which contained a huge amount of information about Dome building and successes and failures that people had had. The most important part for me was the mathematics for the geodesic geometry. Apparently Joseph Clinton and Buckminster Fuller worked together in 1970 using one of the NASA computers to figure out the mathematics for the chord factors and other variables necessary to create domes of different sizes and configurations. This was the basis of the different sizes of Domes that I built over the years for Growing Spaces.”

“Throughout my 30+ year journey with Growing Spaces I felt very much aligned with Bucky‘s vision and principles on many levels. Not only the inherent strength and efficiency of the geodesic shape but also his planetary vision and intelligent design concepts to do more with less.” – Udgar Parsons

A small piece of the history of the Windstar Ranch still lives at The Farm Collaborative in Aspen, CO. A peace pole, a teepee with John Denver’s handprints, and a 42′ Growing Dome that was built thanks to a generous donation from the John Denver Aspen Glow Fund, proudly called the Aspen Glow Dome!

There are no remains of the geodesic domes at the Windstar property, but there are hiking trails and a meditation platform, so it is well worth a visit.

In addition to the geodesic dome, Buckminster was known for many other inventions. They never had the commercial appeal of a geodesic dome home, but many say that he was solving 21st Century problems in the 20th Century.

Buckminster Fuller was first and foremost a great teacher and humanitarian. He described his research and teachings as “comprehensive anticipatory design”. The term Dymaxion he used so frequently was a combination of the design principles he often used: Dynamic, Maximum, and Tension. But to Bucky, it also meant “doing more with less.”