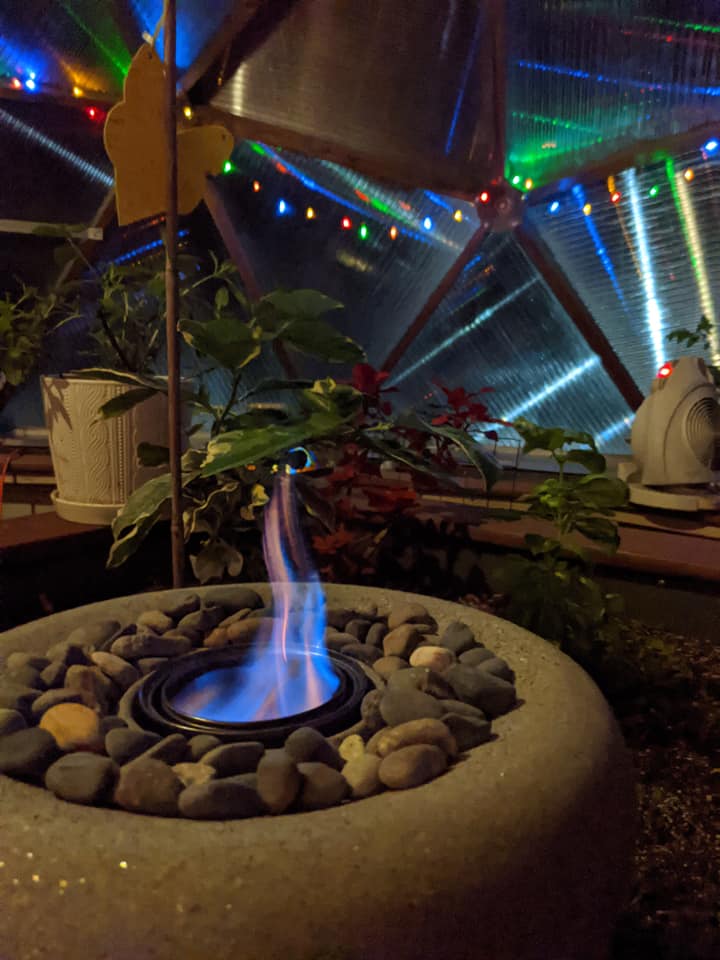 Terry Melim’s 22′ Growing Dome Greenhouse is nestled behind her home in Derry, New Hampshire, next to her abundant and gorgeous outdoor garden. She was attracted to Growing Domes almost 5 years ago after seeing a similar style geodesic greenhouse on Facebook.

“I didn’t want to put up just any old greenhouse. I wanted to be able to grow all year outdoors and to have an oasis to unwind and relax.”

Like many other Growing Dome Enthusiast’s, Terry then researched the best options for building a geodesic dome greenhouse kit. Realizing quite quickly that a Growing Dome Greenhouse Kit was high quality, easy to build yourself, and capable of extending the growing season in frigid New Hampshire. She researched building her own DIY greenhouse but quickly realized it would be faster and more cost-effective to get the Growing Dome geodesic greenhouse kit from Growing Spaces and install it themselves. (Did we mention that it’s also an energy-efficient solar greenhouse?)

Terry believes that the Growing Dome is more than just a backyard greenhouse and encourages “others to look at it as a piece of art. It’s just so cool!”

Terry spends many nights ‘glamping’ in her Growing Dome, and has added many other artistic touches like a fireplace, colorful LED lights, and even spray painted her pond with a beautiful sunset scene.

In May of 2020, right after the pandemic hit, Terry found herself with some extra time and money to focus on expanding her garden. After placing an order in May, her greenhouse kit arrived in early October. Leaving just enough time to build the greenhouse kit and install raised beds before the cold weather arrived.

Terry was assisted with the build by her boyfriend Rick, who also happens to be quite the “handyman.” When we asked Terry what she thought of the installation process, she said, “It was challenging, but we followed along with the videos which made it easier.” When choosing the self-install installation option, Growing Spaces provides a set of DIY greenhouse plans, a step-by-step instruction manual, and detailed videos with the purchase of every greenhouse kit.

Inside her Beautiful Greenhouse

Finishing the outside in just the nick of time, Terry and Rick quickly installed a modified version of a Growing Spaces’ 22′ Raised Bed design, also provided with the instructions, with pressure-treated lumber. Terry lined the inside of the beds with aluminum trim coil and used leftover composite decking around the top of the beds. This acts as the perfect place to put extra tools or take a seat while gardening.

To fill their beds, they used a practice called Hügelkultur, where you build your raised garden bed soil from the bottom up with logs, sticks, leaves, food scraps, coffee grounds, and anything else you would put into a compost heap.

Terry considers the DIY raised bed design to be the most successful part of her greenhouse so far. She planned for the perfect balance of easy access gardening and lounge space. Not to mention Terry’s artistic touch.

Since they did not finish the raised beds and greenhouse until the end of October, Terry opted to transplant much of her outside vegetable garden into the greenhouse. Currently, Terry is growing kale, lettuce, spinach, chard, a fig, lemon, and even an avocado tree that sprouted in her compost pile.

The upfront cost might seem like a big investment at first, but once you get “over the Dome hump, you are ready to go.” Make sure to “do it right the first time” by investing in quality products that last longer. She also thinks it’s important to remember that “everyone uses the Dome differently. It’s your opportunity to continue to try different things.” Think outside of the box.

“Aside from the amazing sense of accomplishment, it truly is a peaceful, wonderful space. I love being able to see things grow and change daily and really interact with the plants and creatures.”

These days you can find Terry out relaxing in the greenhouse on a loveseat under twinkly lights at night or uploading videos to her YouTube channel, Hickory Grove Dome, dedicated to all things dome greenhouse. She is also a frequent contributor to our Growing Dome Enthusiasts Facebook group. Watch her first Dome video here: https://youtu.be/q1XD45jL4ME

If you are interested in learning more about our Geodesic Greenhouse structures and installation options give us a call at 970-731-2120.