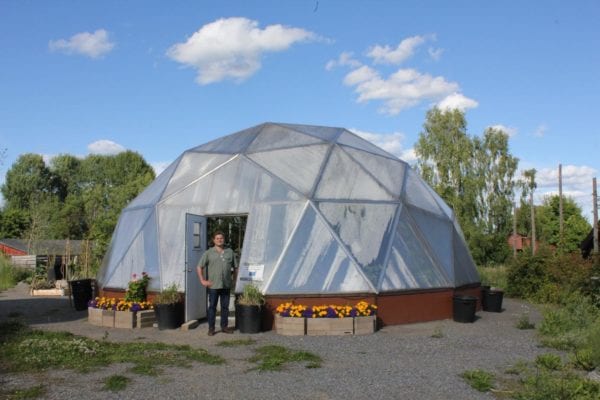 Janet and I first met Bjorn Oliviusson in Fall 2012 when we arrived to help install the 33′ Growing Dome Greenhouse sold to the Royal Institution of Technology in Stockholm, Sweden. As described in Bjorn’s post, it ended up at a school near the university, a pleasant setting, but late Fall in Stockholm the sunlight shines from 9 am to 3 pm, if it’s clear. Most construction days were cloudy! However, cake and coffee was always served at 3 pm. Julien Verchere, a Growing Dome® installer from France arrived soon after us and so it began!

Bjorn’s experience of starting in one direction and advancing into another is not uncommon in school settings. As plans change when one moves from the theoretical – this is what I think I want – to a reality of – this is what I can be successful at, it’s important to remember that gardening, like life, is an adventure! Why not enjoy the trip, and enjoy Bjorn’s adventure and be amazed this is happening at 60 degrees north latitude.

ps.  Looks like I’ll have to go back to Stockholm and help Bjorn with the fans, HA! HA!     Best, Richard

Have You Gone Bananas? Or…

What Have You Done With Your Dome!

Well, to answer that I might as well start from the beginning. I was born in…ok, not that beginning. Try two: In 2011 I had the opportunity to become a PhD-student at the Royal Technical Institute (KTH) in Stockholm, Sweden. At the same time I was working as a Water Strategist at the Haninge municipality, south of Stockholm. The deal between the municipality and the school was that if I did research two days a week on some water-related subject, strategy work the rest of the week, I could keep my salary and KTH would pay all costs related to the project. Sweet deal!

Storm-water (rainwater) is an increasing problem. Many surfaces that normally absorb the water in urban areas get covered by houses, increasing the risk of flooding the sewage systems. My idea was to catch the rainwater on the roof and use it for growing plants. So I started to look for a suitable roof and a greenhouse. Roofs were plenty, but the greenhouse showed to be a problem. I wanted it to be made from wood, it’s a natural material and also a poor heat conductor. I also wanted it to be insulated, energy efficient and resistant to strong winds.

The name of the solution: Growing Spaces®!

We got project-money from the county board, aimed at calculating how this greenhouse would function in the sometimes rather difficult conditions in Stockholm (60 degrees north, about the same latitude as the southern tip of Greenland) with cold and wind. My supervisor then, unlike her normal calm self, took the bold decision to buy the greenhouse and test it, instead of just calculating how it would work.

Shortly after we had ordered our 33′ dome we were told that the roof we had planned to put it on was no longer available. We managed to find a space at the local Agricultural School, Berga, where they train horse-people and farmers. The ground got leveled (I hand-shoveled 130 cubic meters of gravel!) and the boxes with the greenhouse kit arrived. Christmas in September!

We had, on advice from Growing Spaces, hired Julien with Les Serres Domes in France to help us get all the angels right. To our surprise and joy, Growing Spaces also sent two of their staff to help us, for free! The headmaster of the school had a house where our guests could stay, also for free. Richard and Janet Miller came and helped us build the dome, working long days and evenings. They are still some of the nicest people I have ever met and I am very grateful for all the help they provided.

Aquaponics, Spider Mites, and It’s Not Procrastination… I’m Just Putting it Forward on My Agenda

Since I have been growing fish and plants all my life, trying aquaponics seemed like a natural thing to do. I built three bio-beds and planted tomatoes in them. In the tank I put a lot of Tilapia.

When planning for the production, we wanted an energy efficient building. The first summer I realized that I got what I asked for. The vents and fans that I was supposed to install, well, I didn’t. The fans should be square but they were round and I never got around to fix it. So with the sun shining 16 hours a day and with 34 C and no wind outside, the tomatoes started to complain. Well, they didn’t say anything, they just hung their leaves and looked miserable. While I was contemplating my next move, the aphids ate all the tomato flowers.

While I was mourning the loss of the flowers (and my harvest) the spider mites ate the leaves.

The harvest that I got was small but good tasting, so I started planning for next year, hoping to correct all mistakes I had made. I didn’t. The fans are still in their boxes, there are still no holes to put them in. It’s not that I’m procrastinating, I’m just putting it forward on my agenda. I decided to build another bio-bed and plant something that could provide some shade for the tomatoes. Bananas.

Have You Ever Seen a Banana Plant Grow?

I had some small banana plants in a pot so I planted three of them in the box, thinking that this will never be enough. Be careful what you wish for ….! Have you ever seen a banana plant grow? From a tiny, 30 cm plant with a stem you can wrap your fingers around, they grew to 4 meters high and 30 cm in diameter! In six months. During this time the tomatoes had an equally bad summer, 46.7 C in the greenhouse and very humid. While the tomatoes were suffering the bananas thrived!

The tomatoes demanded much care, were sensitive to insects, sensitive to high humidity, high temperatures, low temperatures, handling and generally fuzzy. So the h… with them! Instead I decided to try perennial plants, fruit-trees and plants that could tolerate the shifting conditions in the dome. It would be too expensive and energy consuming to have AC in the dome. And just when I had decided, the banana plants started flowering, on New Year´s Eve! It just must be a sign!

Since then I have filled the dome with all kinds of tropical plants. Some plants, like the papaya, do not tolerate water logged conditions for its roots. Luckily, my plant didn’t know that. From a tiny little plant it grew up to the ceiling in one year, producing 22 kilos of fantastic papayas. The flowers on the banana trees took six months to grow to harvest size, each bunch weighing 26-28 kilos. This variety of bananas, dwarf Cavendish, are grown on the Canary Islands and normally takes 10-12 months to produce a bunch of 25-50 kilos of bananas. My bananas take 11-13 months and have so far produced bunches of 26-32 kilos. Almost the same, but in Sweden! 122 kilos of bananas in one year. Not too bad.

The school’s local distribution system supplies the dome with and heat and electricity. The heating system uses biofuels. In the dome I have a small heat-exchange unit that provides heat to the Aerotemper (radiator and fan combined). It also gives heat to the fish tank and hot and cold tap water. The temperature in the dome is kept at 16 C, mainly because the cocoa trees, five of them, do not tolerate lower temperatures. I haven’t got any fruits on them yet so all advice on how to pollinate them is greatly appreciated.

Being a biologist, I can´t stop getting more and more plants. So far, guava, passion-fruit, carambola, banana and coffee have fruited. The vanilla plants are growing fast but still no flowers. I also have a lot of Bougainvilla and Strelitzia, just because I like them. Also, I started my own company last year, Svensk Aquaponik, (Swedish aquaponics) and things are getting along fine. I have built two new bio-beds and am now testing to grow avocado and mango in the aquaponics system, for a client. The test aims at learning more about flowering and pollination of these species when growing them in a greenhouse. The client has a 17,000 square meter greenhouse. The future looks interesting!

Unlike most scientists I have tried to get many visitors. I believe that all examples of sustainable technology and ways of living must be brought to a bigger audience.

Using good greenhouses and heating them with waste heat, growing locally instead of importing, growing perennials instead of annuals are ways to a more sustainable lifestyle. So far 13,400 visitors from 31 countries have seen the dome and the aquaponics system. Small schoolchildren from the local schools to Coptic nuns from Egypt, they all came to watch and listen. Not too bad. So now, the darkness is settling over Sweden, days are very short and we had our first snow a week ago. So today I went down to the dome, put on all the lights and had some coffee while watching my new giant Pacus (six of them, 7-12 kilos) fighting over the guava fruits I gave them. It’s their reward for having eaten all the leftover banana leaves that I gave them yesterday.

Smelling the flowers of the lime-tree and contemplating on how to get a bigger dome, I think I´ll have some more coffee.