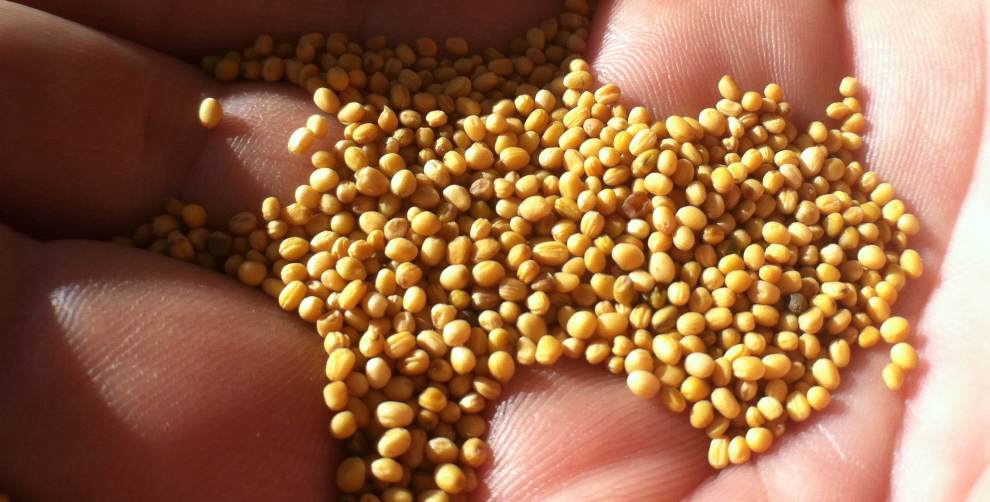 At the beginning of our new project in the 15′ Growing Dome, we heavily amended the soil in the outer growing beds, where we direct seeded many greens and vegetables.  As we constructed a new interior bed to increase growing space with the goal of maximizing production in mind, all of the soil in this new growing bed was added this fall.

When selecting soil amendments and new soil, we kept a number of factors in mind.  First, since the soil in the outer beds was depleted of nutrients from numerous seasons of growing, as well as a bit compacted, we aimed to increase soil tilth, organic matter and available soil nutrients.  In order to improve the condition of this existing soil, we elected to use mushroom compost, organic potting soil and a Back to Earth cotton burr soil builder.  This combination, well mixed, helped to increase the soil structure by improving aeration, drainage, and moisture holding capacity.  The compost was a critical element to add as it increased the amount of soil organic matter, improving available nutrient levels, reducing compaction and also increasing water holding capacity.  We utilized the same mixture of potting soil, compost and soil builder to fill the newly built interior growing bed.

To demonstrate and experiment with different ways of starting seeds, we planted some of our cool season vegetables in starter trays, to be transplanted later into the new center growing bed.  We selected crops that easily survive transplanting, including broccoli, cabbage, brussels sprouts and a speckled lettuce.  Check our our transplanting guide for more information about which crops do and don’t transplant well.  To plant, we used some older plastic growing trays filled with the organic potting soil.  Sowing seeds in flats can be very convenient, as it is easy to remove the entire root system and surrounding soil.  You can also re-use plastic flats and drainage trays after sanitizing them.

There are many reasons to start new plants in flats or another container for later transplant.  Probably the most common reason is so you can utilize transplanted seedlings to time stack or succession plant in the garden.  Other motivations include better environmental and nutrient control for seedlings and season extension, although in a Growing Dome, the season is all year long.

Although we used plastic flats to start our seeds, many containers are suitable.  Wood flats and fiber of plastic trays are great to use for plants that transplant well, plus, starting seeds in these containers saves space.  Seeds can also be sowed directly into plastic or clay pots, which are useful because they can be sanitized and reused over and over again.  When relocating seedlings from a pot to another growing medium, be sure to retain as much of the soil ball as possible to  minimize root disturbance.

Other popular containers for starts include peat pellets and pots.  Peat containers allow for superior drainage and air movement and can be planted directly into the garden if conditions are right.  Directly transplanting whole peat containers with seedlings will likely be successful in the Growing Dome, where it is easy to maintain a moist environment, although it is not a bad idea to break the bottom of the pot before planting and to either remove or completely cover the top edge of the pot with soil.  Failure to cover or remove the tops of peat pots may cause your seedlings to dry out, even if you are watering regularly, as the peat will wick water away from seedling roots.  Peat pots are also not an ideal planting medium in very dry climates as they fail to decompose readily and wick water away from roots.

Sanitation is critical while sowing seeds.  Select planting containers that are either new, or have been thoroughly sanitized.  If you plan to re-use  flats or  pots, be sure to wash them well with soapy water to remove debris. After washing, rinse the containers with a 1:10 water to bleach solution to sanitize.  Let the containers dry completely before filling them with the chosen planting medium (soil mixture, synthetic planting medium, vermiculite, sphagnum moss or other).  Sanitation is a very important step that we actually skipped when sowing our seeds.  Proper sanitation helps to eliminate transfer of seed and plant residue borne pathogens to new seedlings.  Also be sure that the growing medium used in sowing seeds is sanitary, keeping in mind that your growing medium is only as clean as the dirtiest surface it has touched, including your potting bench and tools.  Although it may sound a bit intense, sanitation of both growing mediums and containers is key to preventing the onset of soil, seed and residue borne damping-off diseases.

To begin, we filled our plastic flats with organic potting soil almost to the top of the trays (leaving 1/2-3/4 inch of space).  We made sure the soil was moist and placed a drainage tray beneath each flat.  Then, to facilitate even watering, we leveled and firmed the potting soil, taking care not to compact it.  It is important to avoid pressing down too hard on any planting medium because compaction decreases soil pore space and limits the movement of water and oxygen to growing roots.  After preparing the trays, we planted the seeds according to planting recommendations and directions of the seed packets.  To encourage prompt germination and the growth of healthy seedlings, we were sure to water the trays frequently, but lightly.  Maintaining ideal germination temperatures, light exposure, moisture and fertilization are all key cultural practices that help to increase seedling vigor and allow them to stave off damping-off diseases caused by various fungi.  Creating an ideal growing environment is very important because fungi that cause damping-off disease more easily spread when conditions are unfavorable for plant growth.

Remember, take care to label your seedlings upon planting so you can identify them later.  We included the planting date, plant type, variety and days expected to germination on our labels so we could easily track the progress of the seedlings.  Once they’ve sprouted and grown  their first set of true leaves, it will be time to transplant them into the new center growing bed!

All of the bare soil in this video was an exciting starting point for us.  We’re so proud of how well the garden is coming along this November that we’ll be sharing another video with you next week.  Be sure to check back to see how everything is growing!