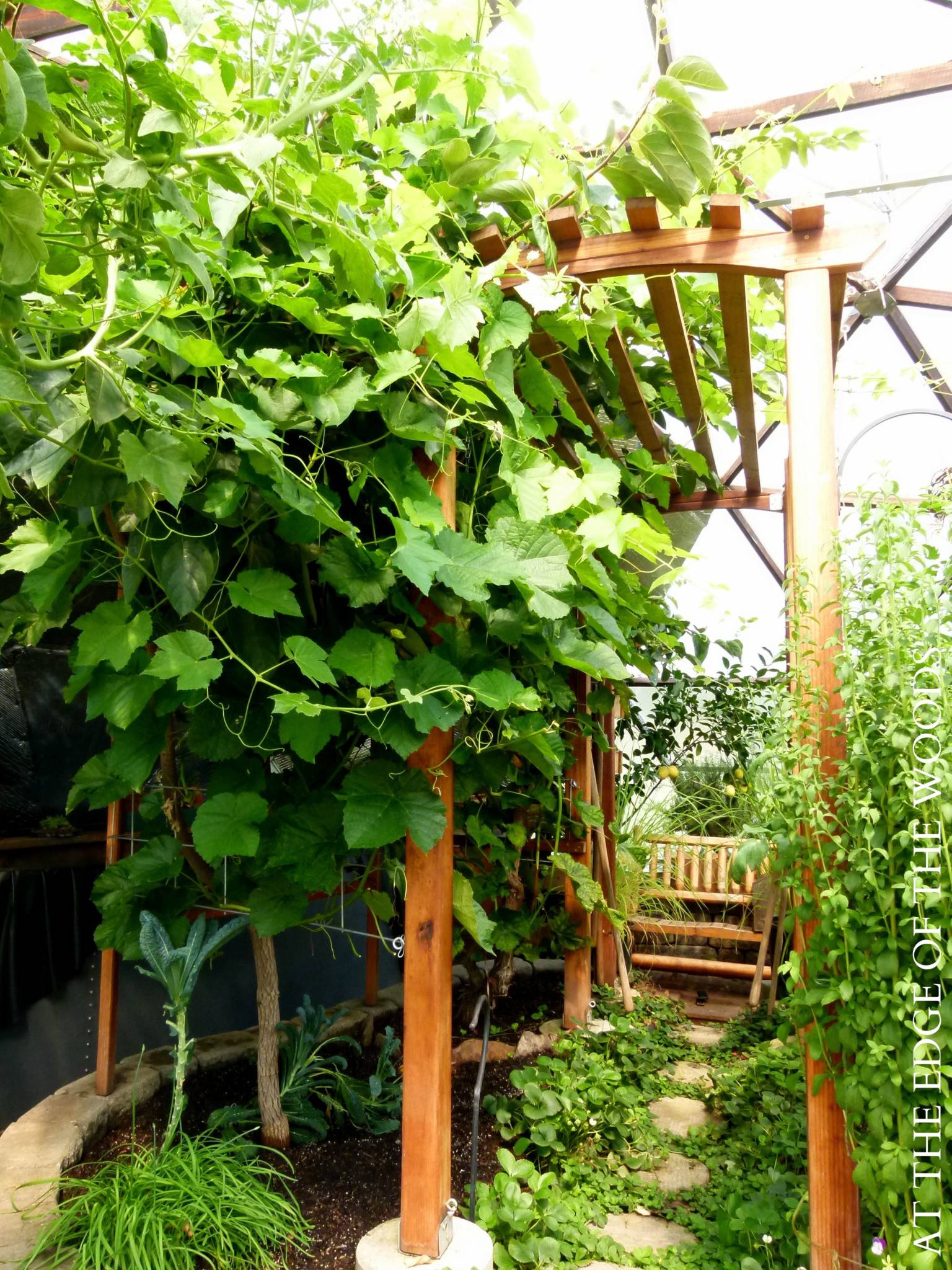 One key to success for us as gardeners has been learning how to work in cooperation with the temperature range and growing season of this valley at the edge of the woods. Our growing dome has been an enormous help to us in this regard, because it allows us to extend our growing season–increasing the productivity of our homestead–and to incorporate both perennial and annual crops that would otherwise be impossible for us to grow. But another facet of growing effectively in our climate is learning how to mitigate the extreme temperatures that we face in both winter and summer. With record-setting temperatures like those we’ve had this summer, it’s hard to even imagine cold winter days. Summer heat, on the other hand, is a daily reality of greenhouse management this time of year.

In spring, early high temperatures are a huge benefit–especially in our mountain location with a short growing season. But as spring turns into summer, the increasing heat in the dome can turn our sanctuary into an oven unless it’s managed correctly. Over the years, we’ve learned how to adapt our growing practices, our plant choices, and even our plant locations to make the most of summer heat and provide much-needed shade for the water tank.

A quick note about the dome’s layout: One of the signature features of the Growing Dome’s design is the way that the geothermal mass of the above-ground pond works as a heat sink. Water heats and cools more slowly than the surrounding air, meaning that it acts as an ambient heater during winter, and a cooler during summer. The efficiency of this system depends on providing adequate shade to keep the tank cool during summer weather.

During the first summer after we installed the exterior dome structure, we were working on finishing the walls, tank, and raised beds. We didn’t have water in the pond yet, and we didn’t have any plants growing in the dome to retain and respirate moisture. This was a valuable lesson for us in what the dome would become without all the systems in place. Daily temperatures while we were building the stack stone walls rose above 100 degrees, and the low humidity in the dome felt more like a dehydrator than a greenhouse. We hurried to complete the rest of the dome by fall, and had the first crops in the beds through that winter season.

The next summer, we used a shade cloth provided by Growing Spaces to block out some of the sun’s intensity and keep the above-ground pond cool. This was our first summer of greenhouse growing, and it was a delight. While the dome’s temperatures still rose higher than we preferred, we began to put plans in place to provide shade without the shade cloth in the summers ahead. Each year we have made adaptations to the way we grow so that the dome works better for us (and we work better with it). These days the temperature rarely rises above 95 degrees in the dome, even during the recent 110+ degree heatwave.

Here are a few of the main factors that have made a difference for us in managing summer heat:

As I mentioned above, the genius of the dome’s design depends on the tank’s ability to maintain a cooler temperature than the air surrounding it. This works most effectively during the summer if the tank is shaded from direct sunlight. After the first summer of using the shade cloth to shield the dome, we planted a Hachiya Japanese persimmon tree and a Suffolk Red grape. These two perennials are on the north side of the dome in front of the tank. As they have grown over the years, they have come to provide more than adequate shade for the tank. In fact, they try to grow out the vents in the roof. While perennial plantings are not an immediate solution for providing shade, they are a long-term solution that we have found to be very effective. The same results could be achieved with a variety of perennial plantings–anything that will provide thick shade cover during summer and then lose its leaves to let sun through to the tank during wintertime.

The transpiration of plants is a powerful ally in cooling the dome. In this summer’s greenhouse, the beds are filled with tomatoes, peppers, beans, a few types of greens, and a number of perennial trees and herbs. Some plants–mostly perennial trees–are growing high in the upper story of the dome, close to the ceiling. Others, like tomatoes and beans, have been trained to grow from the beds up to middle heights (their height is limited by how far I can reach when I’m standing on the walls). At the soil level, peppers, herbs, and kale fill in. The goal of interplanting and use of vertical space is to ensure that as much of the growing area as possible is used. As all of these plants absorb water through the soil and release it into the air through transpiration, they help to balance the dome’s temperature and humidity.

Not only do plants thrive in the high-humidity warmth of the dome, they also cycle an incredible amount of water in through their roots and out through their leaves. Keeping the beds well watered sets plants up for success. It also keeps the ground cooler and the overall temperature of the dome lower when the soil is thoroughly wet. As the surface of the soil dries, water evaporates and cools the dome. The moist earth also works as an additional heat sink–although not as effectively as the above-ground pond or the stack stone walls (more on those in a moment).

During the most intense heat of summer, we often spray down the plants with a gentle shower each morning. This has the triple benefit of washing dust and pests from leaves, providing plants with extra moisture through foliar absorption, and turning plants into an evaporative cooler. We use the same technique with the stone walls of the growing beds and on the path, which is a combination of concrete stepping stones and pea gravel. By spraying down the plants, growing bed walls, and floor of the dome once or twice each day, we can significantly reduce the temperature while increasing humidity.

When we chose the layout for our Growing Dome beds, we decided on stacking stones for the walls. Although we lost some path space because of the stones’ width, we have found that they have many benefits: they work as a stepladder, a potting bench, and permanent raised-bed walls. Also, we have found that they provide valuable geothermal mass for the dome. Like the water tank, the cool stones keep soil and air temperatures moderated in summer.

One last adjustment that we have made this summer is to begin leaving the greenhouse door open in the early mornings to let in cool morning air. As soon as temperatures outside the dome begin to rise, we close the door to help the inside retain its cooler temperatures. This increases ventilation and airflow in the dome as well and encourages the presence of pollinators.

To our surprise, we have found that during the recent extreme temperatures, tomatoes in the dome are setting more fruit than those outdoors. The blooms benefit from cooler temperatures inside the dome, as well as from high humidity.

As we head into August, we will be doing all we can to maintain a thriving, productive garden both inside and outside the dome. Each season, we learn a little bit more about how to adapt to the land where we live and work alongside it to create an abundant garden.

For more information about our Growing Dome, the outside gardens, the animals, and the way we are living abundantly on our homestead, check out the blog at www.attheedgeofthewoods.com/blog. You’ll find this article with extra information and photos, as well as many other posts on a variety of topics related to gardening and homestead living.