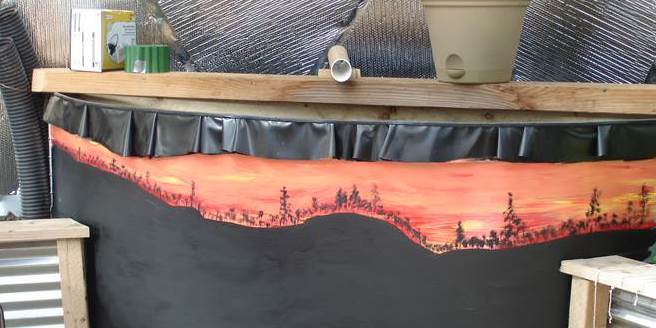 “I’ve been working hard on the cosmetics inside and outside the Growing Dome while my fall crop ripens. I now have seven cantaloupe blossoms, ten beans that are almost ready to pick, eighteen bean plants that have already reached the top of the vent, and nearly eighty tomatoes. We’ve only picked three tomatoes, but there are quite a few blush-colored ones. We might have to heat the Growing Dome a bit until the tomatoes ripen, but next year they will ripen earlier. The Swiss chard, beets and peas are all doing very well. It’s already in the upper 40s at night now, but the dome heats up to mid-eighties during the day. It’s usually about 60 degrees in the early morning. This morning was very special in the dome. I took my yogurt and coffee to the dome to just sit. I was rather startled when the elk started bugling right near me, probably at our stream. It was the loudest bugle I have heard since we moved here. What a fantastic way to eat breakfast. It’s the wake-up call of the wild!

When we get settled with our plantings next spring, we will concentrate on building an island—most likely a low-level strawberry tower. Boo, our cat, loves the bits of catnip that I bring into the house each morning. The catnip is doing very well in the Growing Dome—a small patch just for Boo! She now nags me to go to the Growing Dome first thing each morning to bring back her special treat! She leaves absolutely not a tiny tidbit of catnip!”