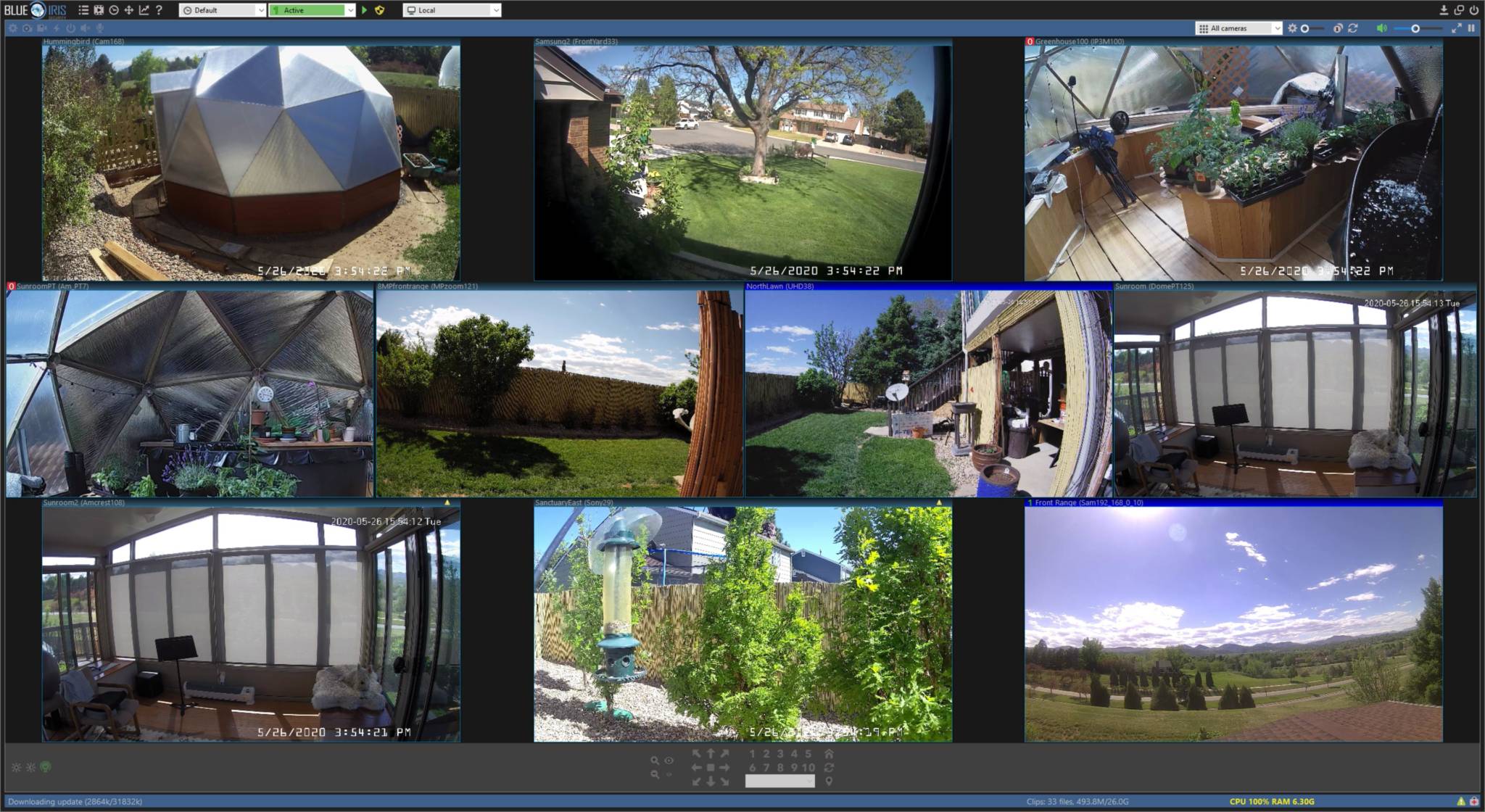 Richard Stith grew up gardening in southern New Mexico. After moving to Colorado, his only disappointment was the short growing season and the late freeze or hail, which often damaged or completely wiped out his outdoor garden. He searched for a year-round greenhouse that could withstand high winds, which often exceed 60 mph at 5,630 ft. in Littleton, Colorado.

During Thanksgiving in 2019, he attended a family get-together at a relative’s home where he ran into Larry. Larry had recently installed his 18′ Growing Dome and provided all of the fresh greens for dinner.

After speaking with Larry about the features of a Growing Dome, Richard “fell in love with the design, including all the solar features and its ability to withstand high winds.” He said, “It also just looked really cool.” Richard placed an order in December and received his prefabricated greenhouse kit in early April 2020.

“The timing proved perfect because, after the pandemic began, most of my favorite activities, tennis and chamber music, were put on hold. I retired 8 years ago, so I might have gone nuts without a huge project to work on.” Richard definitely went above and beyond with his Growing Dome, making it a completely automated greenhouse!

To prepare the greenhouse build site, Richard had a landscaper level the site as his backyard is on a slight incline towards his home. The landscaper “removed about 18 inches of soil (mostly clay) on the east side of the site and none on the west side, and then added the gravel ring.” Richard said if he could do it again, he would have had his site prepared before he got his kit.

“I had previously fenced off an area on the south side of my yard for a Wildlife Refuge, where I hang bird feeders and have webcams mounted on the fence so that I can watch the birds.” It only took Richard, and two hired construction workers (who had no Dome building experience), three and a half days to build the Growing Dome in the last week of April.

After much discussion on the bed design, Richard hired a local contractor, and long-time friend of Growing Spaces, Steven Stouffer Jr. to build the raised beds. He wanted there to be enough open spaces inside of the Growing Dome to put his outdoor potted plants inside during the colder months.

He also had his landscaper build a 48′ wide path from the patio all the way to the greenhouse door and along the north side. “It is 21′ from the patio edge to the front door of the dome, and extends 5 more feet to the Sanctuary fence. The path for potted plants on the north side is 16′ long.” Assuming it would be “easier to use a planter dolly to move everything inside,” After more consideration, Richard realized it would be much easier to move the pots if he put fabric planters inside.

“I also added solar path lights to make it easy to walk to the dome if I want to spend time there after dark.”

Richard used Bamboo flooring for the raised beds and floorings that he salvaged from the family room after converting it to a home theater 6 years ago. “Wood floors are not good for ideal sound production, so I had to put in carpet. It was sitting by the side of my house, wrapped in plastic, all that time.” Unlike your standard floor installation, Richard specifically requested Steven to “leave spaces after each couple of rows of flooring. We basically built 2-foot high bed walls out of 2x4s, lined them with steel, faced them with the bamboo flooring, and topped them with 2×6s. This makes it easier to sweep dirt between the openings keeping the growing spaces nice and tidy.

“I bought an extra roll of steel, just like that which came with the kit, and used it to line the walls of the beds. Since I knew I was getting a late start, I also used the steel to make partitions between sections of the beds (with holes cut out for the ducts). That way, I could fill the individual beds one at a time and plant them while mixing soil.”

“We basically built 2-foot high bed walls out of 2x4s, lined them with steel, faced them with the bamboo flooring, and topped them with 2×6 redwood (stained and varnished), so I can sit comfortably to plant and weed. We made a couple of the sections only 1 ft. deep and put a drawer underneath to store drip irrigation and garden accessories.”

“With Hügelkultur in mind, I used chopped up felled tree branches left from a huge storm we had here in Littleton and most of the pruning from all my garden shrubs, etc. I filled the beds almost halfway full with branches and then added soil to fill. This has the added benefit that, as the wood decomposes and takes up less space, there will be room to work fresh compost into the top of the beds each year.”

“For soil, I mixed all the old garden soil from a 4’x 8’x 2’ deep flower box (that hadn’t been in the proper space for good light). I added a little super hard clay from the excavation (I had to break it up with a sledgehammer) because I heard that was good for water retention. I added lots of peat/sheep compost, vermiculite, perlite, and peat moss to loosen the soil and then fertilizer.”

“I filled an 80-gallon compost barrel about half full and rotated it ten times to mix the soil components, and then hauled it into the dome one Homer bucket at a time. What a job!! Luckily. My masked grandsons were able to help me for several days.”

The Above Ground Pond & Thermal Mass

To keep the main source of thermal mass in tip-top shape, Richard used a garden hose connected to a quick disconnect installed outside the Dome. It runs to a float valve in the tank to keep it topped off. When it is cold outside in Colorado, Richard manually connects it about once a week during warm afternoons. This is an important part of the Growing Dome’s natural climate control system, and it helps to maintain an ideal temperature and humidity.

“It’s amazing: the plants look better now than they did all summer! She’s the one who told me to keep my orchids above the water tank, and that’s working great. I also attached a cup holder to the water tank to hold my morning coffee and have a tablet stand in case I want to torture myself with The Bad, Horrible News This Morning.” (Growing Spaces does not recommend reading the news while in your greenhouse.)

In addition to gas, electricity, and water, Richard ran an Ethernet cable underground through the conduit to a PoE (Power over Ethernet) switch in the dome. This allowed him to plug a WiFi node and a SmartThings hub into the switch. He then installed three PoE cams in the Dome: one on the north end, one on the south, and one underwater.

“I can watch the dome interior on my phone or computer anywhere. I put in a set of three 6 watt LED lights on the bottom of the pool, so now I can see the fish more easily. For backup, there is a SmartThings temp/humidity sensor in the dome and a door sensor that can warn me if I’ve left the door open.”

Most of the outlets and the light switch in the dome are WiFi/Alexa compatible. He found that the Echo Plus 2nd gen has a temperature sensor and allows you to write routines based on the temperature of the Echo. Adding two paired speakers also made a nice stereo for jamming out.

“I wrote one routine for temperature control, which turns on an extra vent fan when the temp rises above 85 degrees. The routine also messages my phone, and all the Echos in my house announce, “The greenhouse is getting hot.” I wrote another routine that was intended to turn on an automatic water valve to run the misting system for 10 minutes, but it would ask me if I wanted to do this, and I’d have to confirm before it would turn the mist on, so that is still a work in progress. “

Richard can also turn on the lighting (pool lights, decorative lights, the main LED spotlight, and the fan) either on a schedule or via voice command run via an Alexa routine. “I just wrote a routine, so it will warn me if the temp drops below 45 degrees so I can have it power on an electric heater (must be an old non-electronic space heater—the modern ones won’t heat when you only turn the power on).”

“I’m enjoying feeding the goldfish (5 Oranda and 2 Black Moor) much more than I expected. I wrote an Alexa routine that is triggered when I say, “Alexa, Dinnertime.” The Echos play Octopus’s Garden, and, in a Pavlovian response, the goldfish come to the surface to eat. That makes me happy. After that song is finished, the routine has the Echos play classical music for 8 hours, then turns off the music and lights.”

All of this technology helps Richard optimize his growing environment. “The first thing you see when you walk in will be beautiful flowers. I even planted some Bird of Paradise seedlings. My Purple Possum Passion fruit vine is growing incredibly fast up a trellis on the SW “side” of the dome, and I hope it will help cut down on the heat in the summer. I have to figure out what will grow in front of the solar fan since the tomato plant I tried there didn’t seem happy or generate a high yield.

Marijuana grows really well inside the dome too. I got double the production from the previous summer, and it’s really nice that the panels are translucent, so passers-by can’t tell what I’m growing. (although it is within the legal amount in Colorado.)”

“I very much look forward to sharing tips with dome owners in the Facebook group from whom I’ve gotten so much good advice already. I’m also happy to answer questions about Alexa automation and routines. I guess this is a learning process for all of us. Thanks to the wonderful staff at Growing Spaces for their help in making my dream come true.”

If you are interested in visiting Richard’s greenhouse in Colorado or just connecting via phone/email, send an inquiry to kenzie@growingspaces.com.

Have questions about a high altitude gardening? Send us an email to info@growingspaces.com.